Insulin binds to the insulin receptor (InsR), which exists in two alternatively spliced isoforms, InsR-A and InsR-B. The insulin receptor belongs to the same family of receptor tyrosine kinases as the IGF1 receptor (IGF1R) and insulin is therefore also able to bind to the IGF1R albeit with considerably lower affinity as compared to the InsR.

NNC0069-0961 (also known as S961) is a single chain peptide consisting of 43 amino acids, which has been shown to be a specific InsR antagonist. The affinity of S961 for the InsR is comparable to that of human insulin and the selectivity for the insulin receptor versus the IGF1 receptor is higher than that of human insulin. S961 is also an antagonist of the InsR of other species such as pig and rat and it also has considerable affinity for hybrid receptors consisting of InsR and IGF1R. S961 completely inhibits insulin action, both in cellular ﻿in vitro assays and in vivo in rats.

Thus, S961 exhibit high affinity and selectivity for the InsR and can be used to unravel the role of InsR signaling and function in both in vivo and in vitro experiments.

Selected calculated properties for NNC0069-0961 are listed in the table. 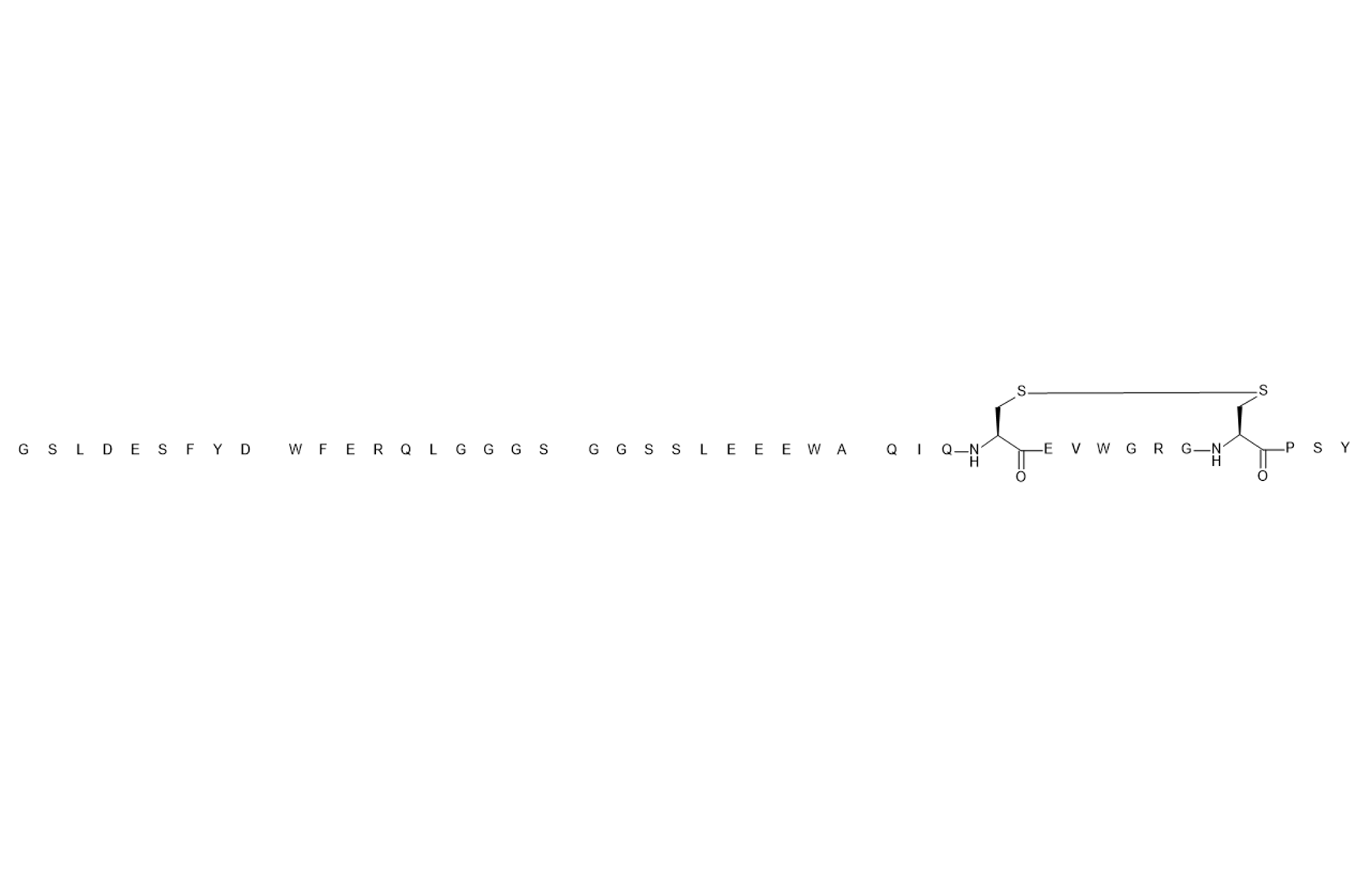 2D sketch of the structure of NNC0069-0961. The compound is composed of natural amino acids and contains one disulfide bridge.
Receptor binding affinities for NNC0069-0961 is given in the table (based on the Schäffer et al. 2008 reference listed in the reference section).

The binding affinity of NNC0069-0961 for various InsR variants are given in the table below. The affinities were determined by competition assays either in a scintillation proximity assay (SPA) or a PEG precipitation assay format using solubilized holoreceptors (see the Schäffer et al. 2008 reference listed in the reference section for further details on the in vitro assays).

Please see the Vikram and Jena 2010 reference listed in the reference section for further details.

Human insulin (NNC0121-0308) is available as a reference compound to NNC0069-0961. Please indicate (with a check mark at ‘Please add the reference compound if available) during your compound request if you would like to have human insulin (NNC0121-0308) included in your shipment.
Peptides and proteins tend to adhere to glass and plastic surfaces. This may at low concentration impact the actual amount in solution. To minimize this unspecific adherence, adding detergents or inert proteins like e.g., ovalbumin or other serum albumins to the solution can minimize this phenomenon. In case albumins are added to peptide/protein solutions, ensure that the albumins are free of any proteases. Recommended storage of the freeze dried API is -20C. Recommended procedure for in vitro studies: dissolve the entire content of the vial by adding 4 mL 30 mM HEPES buffer pH 8. Gently rotate the vial until all content is dissolved. Avoid harsh shaking or stirring of the solution. Keep the stock solution at 4C overnight and make the desired number of aliquots (use low protein binding vials) of the stocks. Snap freeze the aliquots in liquid nitrogen and store them at minus 20C. When thawed, the stock solution should be stable for up to three weeks at 4C. Recommended procedure for in vivo studies: NNC0069-0961 can be dosed in vivo in a formulation vehicle containing 10mM sodium phosphate, 140mM sodium chloride, (0.007% polysorbate 20 if concentrations are so low that adsorption to vials may affect the concentration), pH 7.4. Formulations should be used fresh, but can be stored for up to one week refrigerated.

A novel high-affinity peptide antagonist to the insulin receptor