NNC0123-0327 is a liver-preferential insulin analogue with a C20 fatty diacid attached at position A22K. NNC0123-0327 is able to bind reversibly to serum albumin with high affinity (which reduces the trans-endothelial transport from plasma to periphery) while retaining a high InsR affinity in the presence of albumin compared to other acylated insulin analogues ensuring a high hepatic InsR-mediated clearance). Due to these properties, NN0123-0327 therefore displays its liver-preferential effects following peripheral administration.

2D sketch of NNC0123-0327. The B chain is lacking threonine at position B30, contains a B29 arginine substitution and there is an additional lysine a position A22 to which a fatty diacid is attached via a gamma-Glu-2xOEG linker. 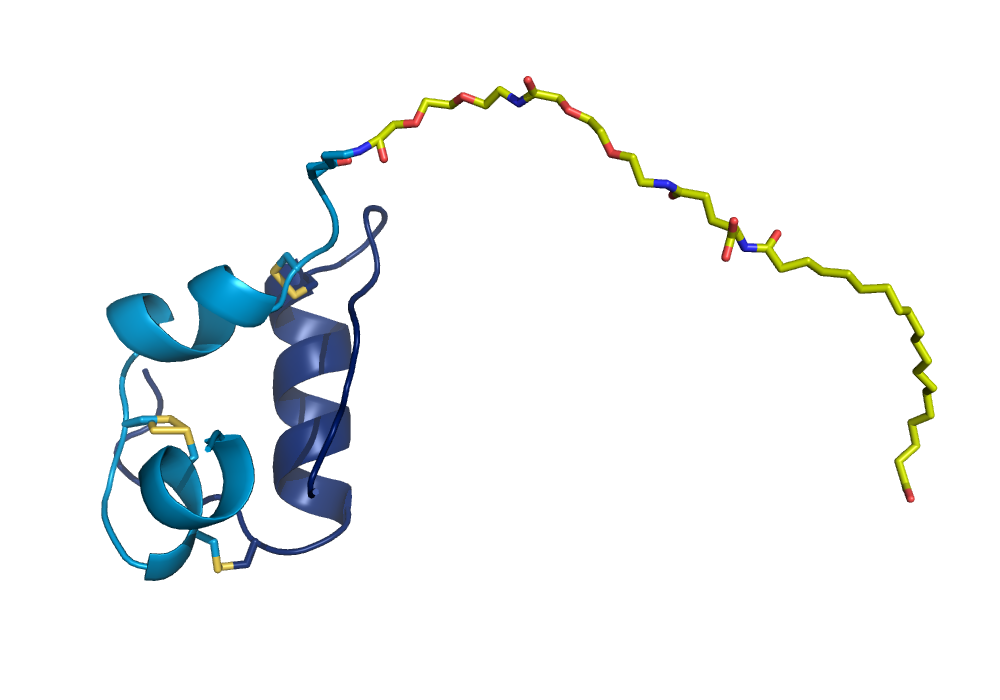 The in vitro receptor binding affinity of NNC0123-0327 relative to human insulin (HI) is shown in the table below. The affinity was determined using human insulin receptor isoform A and also the human IGF1R as solubilized holoreceptors in the absence or presence of 1.5% (w/v) human serum albumin (HSA). Since albumin binding is a key mechanism for the design of NNC0123-0327, be aware that the apparent affinity and potency will be very dependent on whether the in vitro assays contain albumin or not.

The pharmacokinetic properties of NNC0123-0327 in Wistar rats following an i.v. injection are listed in the table.

NNC0123-0327 displays a markedly protracted PK profile in vivo following a s.c. injection. Plasma PK parameters following i.v. dosing from a study in Wistar rats are given in the table below. For i.v. and s.c. studies in rats, dose levels of 1-5 nmol/kg and 5-30 nmol/kg, respectively, are recommended both for once and twice daily dosing studies. For the i.v. study in the table below, NNC0123-0327 was dissolved in 5 mM phosphate, 140 mM NaCl and 70 ppm polysorbate 20, pH 7.4. The PK parameters for NNC0123-0327 are determined in wake rats whereas the parameters for human insulin are determined in anaesthetized rats. The evaluation of the liver-preferential effects of NNC0123-0327 is described in the Edgerton et al. references listed in the reference section.

CL: clearance; MRT: mean residence time; T1/2: half-life; Vz: volume of distribution
Human insulin (NNC0121-0308) is available as a reference compound to NNC0123-0327. Please indicate (with a check mark at ‘Please add the reference compound if available) during your compound request if you would like to have human insulin (NNC0121-0308) included in your shipment.
Peptides and proteins have a tendency to adhere to glass and plastic surfaces. This may at low concentration impact the actual amount in solution. To minimize this unspecific adherence, adding detergents or inert proteins like e.g., ovalbumin or other serum albumins to the solution can minimize this phenomenon. In case albumins are added to peptide/protein solutions, ensure that the albumins are free of any proteases, but be aware that it will affect the apparent potency and affinity in in vitro assays in case a fatty acid is attached to the compound. Recommended procedure for in vitro studies: dissolve the entire content of the vial by adding 4 mL 30 mM HEPES buffer pH 8. Gently rotate the vial until all content is dissolved. Avoid harsh shaking or stirring of the solution. Keep the stock solution at 4C overnight and make the desired number of aliquots (use low protein binding vials) of the stocks. Snap freeze the aliquots in liquid nitrogen and store them at minus 20C. When thawed, the stock solution should be stable for up to three weeks at 4C. Recommended procedure for in vivo studies: NNC0123-0327 and human insulin (NNC0121-0308) can be dosed in vivo in a zinc-free and phenol/m-cresol-free formulation vehicle. For NNC0123-0327 it may contain 8mM sodium phosphate, 240mM glycerol, pH 7.4 and for human insulin it may contain 10mM sodium phosphate, 140mM sodium chloride, pH 7.4. For both compounds, consider adding 0.007% polysorbate 20 if concentrations are so low that adsorption to vials may affect the concentration. If insulin oligomeric/multimeric properties are of interest, zinc and phenol/m-cresol can be added. Zinc is typically added as zinc acetate between 0 and 6 moles/mole of insulin analogue. The resulting tonicity should be recalculated. Formulations should be used fresh but can be stored for up to one week refrigerated.