NNC0113-0217 (also known as semaglutide) is a GLP-1 analogue with 94% sequence homology to human GLP1 that binds and activates the GLP-1 receptor. Compared to native GLP-1, NNC0113-0217 have been designed to be long-acting in vivo. The main mechanism for the extended half-life is albumin binding. Furthermore, NNC0113-0217 has a delayed uptake from the subcutis. Also, NNC0113-0217 is fully stable against dipeptidyl-peptidase 4 (DPP-4).

2D sketch of NNC0113-0217. NNC0113-0217 has a C18 diacid chain which is attached via a glutamic acid linker plus a hydrophilic spacer (2xOEG) to lysine at position 26. In addition, lysine is replaced with arginine at position 34. The fatty acid side chain enables reversible binding to serum albumin in the blood stream, which increases the half-life of the molecule. Furthermore, alanine at position 8 is substituted with 2-aminoisobutyric acid (Aib) to increase stability against DPP-IV cleavage. 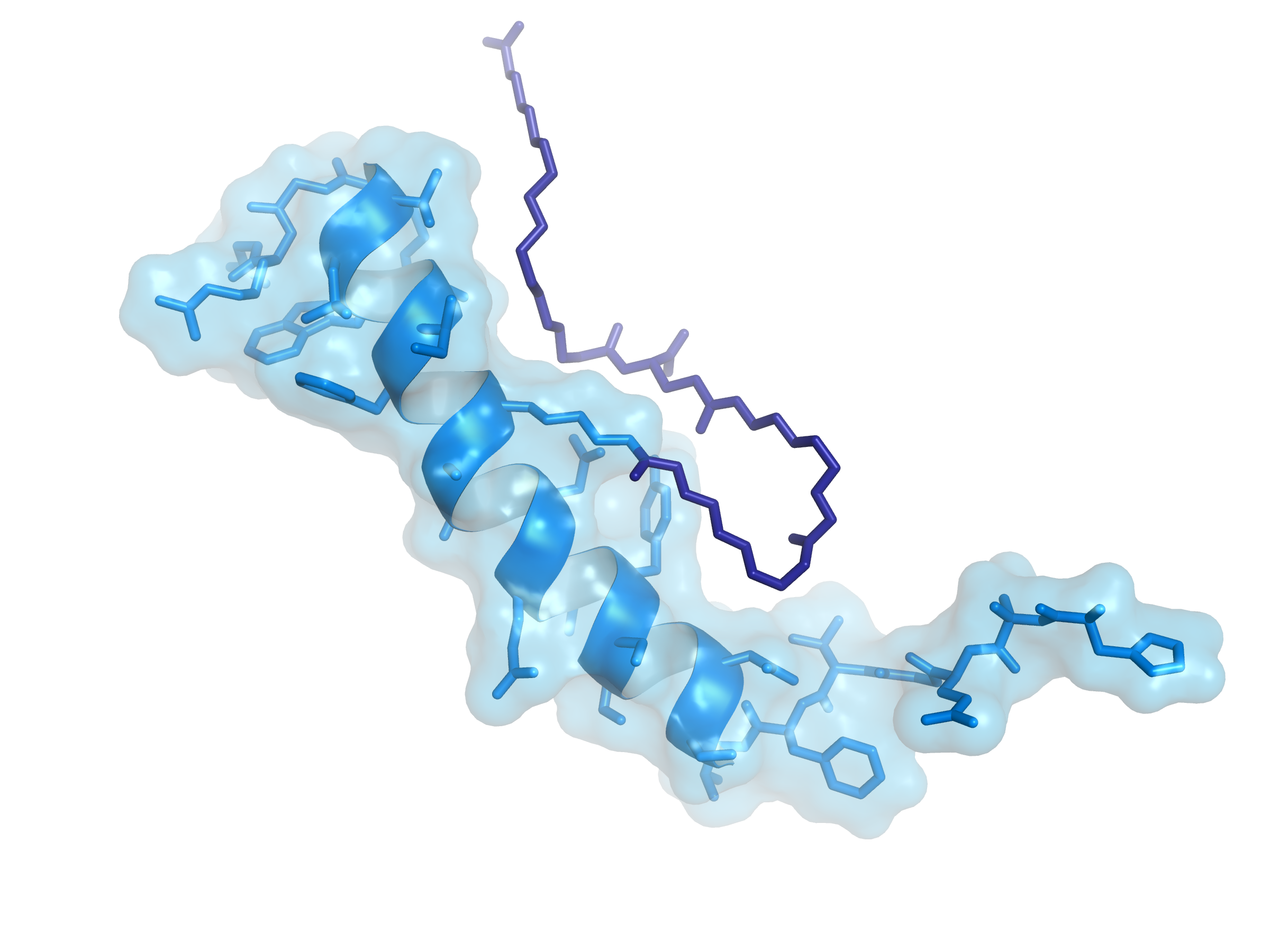 3D model of NNC0113-0217 based on a crystal structure and modelling of the fatty acid side chain.

All in vitro data are based on assays using cloned human GLP-1 receptors expressed in baby hamster kidney cells. Since albumin binding is a key mechanism for the design of NNC0113-0217, the apparent affinity and potency will be very dependent on whether the assays contain albumin or not. See the Lau et al. 2015 reference listed in the reference section for further details on the experimental setup of the in vitro assays that have been used to generate the data in the table.

NNC0113-0217 has been tested in a range of diabetic and obese animal models. In normal male rats, the in vivo potency was estimated by dosing NNC0113-0217 subcutaneously (s.c.) followed by an i.v. glucose infusion 3 hrs later. NNC0113-0217 stimulated plasma insulin secretion and lowered blood glucose at a dose of 123 ug/kg.

When administering NNC0113-0217 to animals it is necessary to do dose titrations. A good dose for pharmacological experiments could be 120 ug/kg once daily titrated up from 12 ug/kg to 40 ug/kg to 120 ug/kg.

Human GLP-1(7-37)-OH (NNC0113-0007) is available as a reference compound to NNC0113-0217. Please indicate (with a check mark at ‘Please add the reference compound if available) during your compound request if you would like to have NNC0113-0007 included in your shipment.
Peptides and proteins tend to adhere to glass and plastic surfaces. This may at low concentration impact the actual amount in solution. To minimize this unspecific adherence, adding detergents or inert proteins like e.g., ovalbumin or other serum albumins to the solution can minimize this phenomenon. In case albumins are added to peptide/protein solutions, ensure that the albumins are free of any proteases, but be aware that it will affect the apparent potency and affinity in in vitro assays in case a fatty acid is attached to the compound. For in vitro studies, NNC0113-0217 can be dissolved in 80/20% DMSO/MilliQ water (e.g. at a concentration of 300 uM). NNC0113-0217 can be dosed in vivo in a formulation vehicle containing 50mM sodium phosphate, 70mM sodium chloride, pH 8.0. If concentrations of the intended dosing formulations are very low (low uM to sub uM concentrations), adsorption to vials may affect the measurable concentration. In this case, consider adding 0.007% polysorbate 20. Formulations should be used fresh, but can be stored for up to one week refrigerated. The compound is research/laboratory grade purity.

The Discovery and Development of Liraglutide and Semaglutide