Back Board of Directors

The Board of Directors

The company has a two-tier management structure consisting of the Board of Directors and Executive Management.

The Board of Directors supervises the performance of the company, its management and organisation on behalf of the shareholders. It also participates in determining the company strategy.

Executive Management, in turn, has responsibility for the company's daily operations.

The two bodies are separate, and no person serves as a member of both.

About the Board of Directors

On behalf of the shareholders, the Board determines the company’s overall strategy and actively contributes to developing the company as a focused, sustainable, global pharmaceutical company. The Board supervises Executive Management in its decisions and operations. The Board may also issue new shares or buy back shares in accordance with authorisations granted by the general meeting and recorded in the meeting minutes.

The guiding principle in composing the Board is that it should comprise individuals whose particular knowledge and experience enables the Board as a whole to attend to the interests of shareholders, employees and other stakeholders.

The Board has 13 members, nine of whom are elected by shareholders at general meetings, and four are Novo Nordisk employees from Denmark, elected by Danish employees.

At the Annual General Meeting in March 2020 nine shareholder-elected Board members were re-elected.


Nomination of Board candidates by the Board

The Board has determined which competencies should be present at the Board. The competence profile is reviewed annually by the Board.

A proposal for nomination of shareholder-elected Board members is presented by the Nomination Committee to the Board taking into account required competences as defined by the Board’s competence profile and reflecting the result of the Board evaluation process and the need for integration of new talent and diversity. In nominating candidates, the Nomination Committee seeks to achieve a balance between renewal and continuity, and it is Novo Nordisk’s aspiration that a person is not nominated for election or re-election if such Board member has been a Novo Nordisk Board member for 12 years at the time of the general meeting.

Executive search has helped identify Board members who meet the above criteria.

Descriptions of the candidates' qualifications accompany the agenda of the general meeting.

New Board members undergo an induction programme equivalent to two full days during their first year on the Board and subsequently participate in educational activities as required to update and refresh their competences and knowledge, including issues related to environmental and social risks and opportunities.

The Board ordinarily meets seven times a year, including a strategic session over two to three days. In 2019, the Board conducted eight Board meetings. All members attended all meetings within the member’s term in 2019, except one Board member who was excused from one meeting within the member’s term in 2019. Please refer to the Annual Report 2019 on p. 39 for a detailed attendance overview, including attendance at committee meetings. By means of a fixed annual calendar, the Board ensures that it addresses its main tasks in a timely manner.

With the exception of agenda items reserved for the Board's internal discussion at each meeting, executives attend and may speak, without voting rights, at board meetings to ensure that the Board is adequately informed of the company’s operations. Executives' regular feedback from meetings with investors allows Board members an insight into major shareholders' views of Novo Nordisk.


Trading in Novo Nordisk shares by Board members, executives and other employees 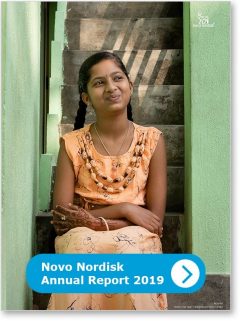 Information on the Board of Directors