With millions displaced by war, business has a key role in helping refugees to integrate, contribute and flourish in society.

Just five minutes spent over a coffee in the company of a Syrian refugee can be incredibly humbling. Each individual you meet has their own personal backstory of despair and upheaval. Days on end spent on an over-crowded boat, bobbing on the Mediterranean. Families fragmented and dispersed. Careers and livelihoods abruptly curtailed.

Then there’s the struggle to integrate into a society with norms and practices far removed from the daily reality they so recently left behind; a series of daily challenges faced with what little assistance can be secured from a limited and sometimes non-existent support network. Learning Danish. Improving their English. Resuming an education cut short by war. Seeking employment - the list goes on.

And yet, the last thing your coffee companion seeks is your sympathy. Instead, they exude determination, resilience and ambition. They turn to humour to describe their challenges. Their questions reveal deep curiosity for the new world in which they seek to apply their talents and flourish.

Each powerful story and experience is only single pixel in the vast, panoramic image of the international refugee crisis. More than two million people have arrived on the European continent alone since 2014, dispersing far and wide in search of security. The largest continental influx of refugees since World War Two has brought with it divided opinion and heated debate. But on the ground, governments, municipalities, societies and businesses have begun to address the needs of new arrivals and to consider the opportunities and new horizons they represent.

For Novo Nordisk, the straightforward decision was to be part of the solution. The harder question as a pharmaceutical company was how to support a diverse population of refugees as they seek to integrate within Danish society and the workforce.

Partnering with Foreningen Nydansker (The New Danes Association), an NGO aiming to improve the integration of immigrants into Danish society, a decision was made to support those arriving in Denmark in possession of university degrees. The scientific, technical nature of the life science industry and the lack of broader opportunities and initiatives in Danish business made the choice to support this segment of the refugee population a logical one. 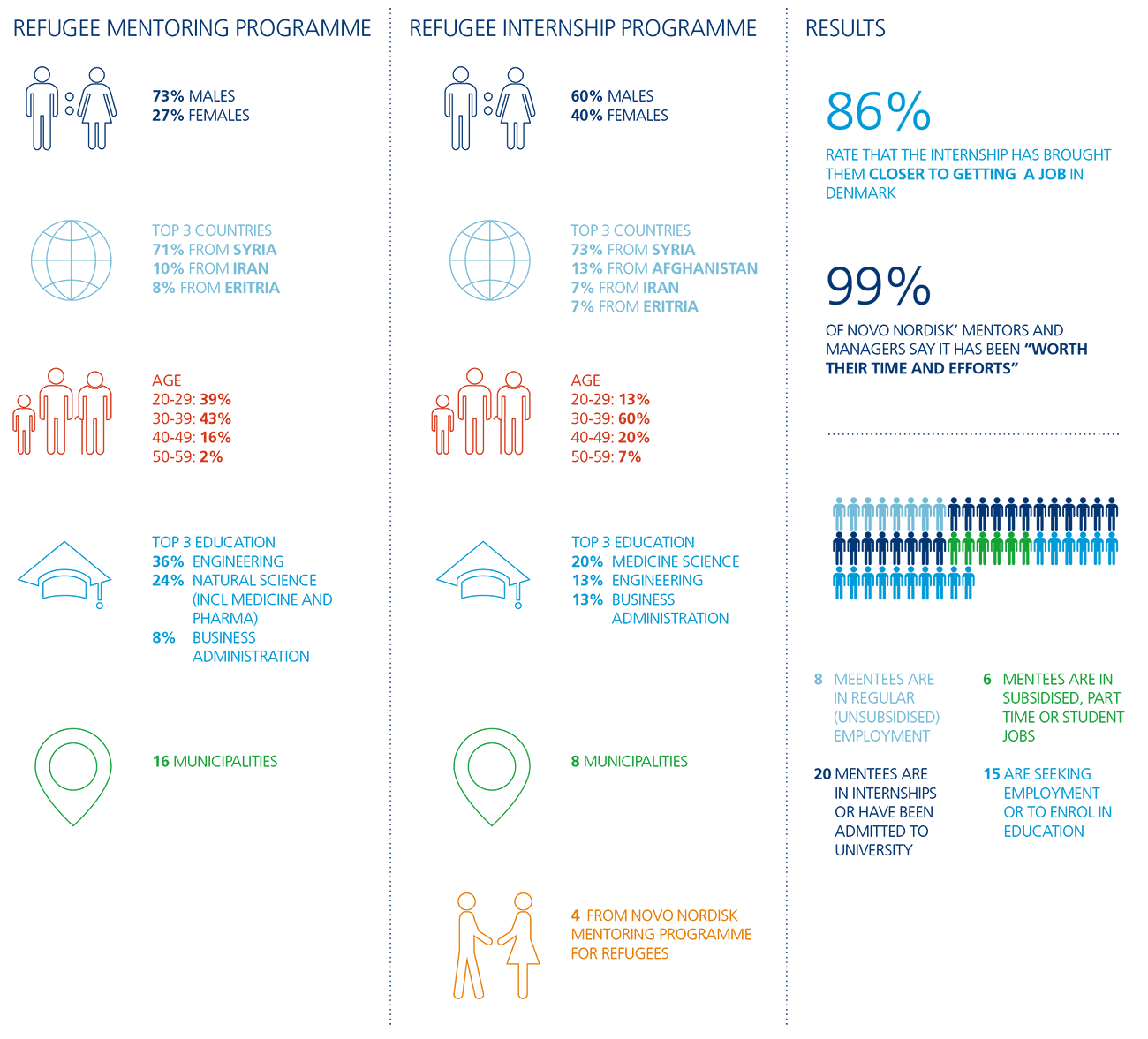 About the graphic here

Mentors and managers within the company were identified, profiled and paired with refugees from Syria, Afghanistan, Eritrea and beyond. Since 2016, more than a hundred refugees have participated either in 3-6 month internships or intensive mentoring programmes. Some are recent graduates or post-grad students. Others are doctors and computer programmers – middle class professionals in the not-so-distant past who must now forge new careers on foreign soil.

Through mentoring and immersion in a Danish workplace, Novo Nordisk aims to equip participants with the skills, experience and networks that will partly enable their future career success. Almost 90% of interns enrolled in the programme said the experience has brought them closer to landing their first job in Denmark. And while participants always knew that employment in Novo Nordisk was never an objective of the initiatives, a handful now find themselves in full-time positions within the company. Not only is this a win for them on a personal level and for Novo Nordisk as an employer, it’s also a win for the Danish state as it seeks, along with the rest of Europe, to resolve the ongoing refugee crisis for the good of all.

Novo Nordisk has set itself the target of powering its global production with 100% renewable energy by 2020.

Learn more about our environmental target

Respecting the rights of our employees, customers and the communities where we operate is job #1.

Learn more about our commitment to human rights

The Novo Nordisk Way describes who we are and how we work - everywhere we operate.